April is Sexual Assault Awareness Month and this is my two cents.

Every 8th of March, we celebrate the International Women’s Day and all the social media feeds and lifestyle platforms are full with feminist articles aiming to empower women. To show the world that women are able to fill leadership roles, to found successful startups, to raise awareness through their art, to cause social change as politicians, to talk back and raise their voice when injustice occurs.

These women are remarkable and we need to learn about them. We need to be inspired by women that break the chain of silence. To be empowered from women that have built successful careers. They are role models for us and our daughters, they create a huge impact in society by showing us the way. They contribute to a culture that celebrates and encourages women to challenge the gender stereotypes and have a seat on the table.

What I’m missing though in this celebration is men. Apart from giving flowers (yikes!) what do men do or say when it comes to women’s day and feminism?

The same applies to all the times that public attention is directed in relevant social issues. April is Sexual Assault Awareness Month and again the only ones talking about it are womxn.

This absence of participation makes me wonder how are we supposed to build a fairer, more egalitarian society when the only people that advocate for that are the ones whose lives are negatively affected from the injustice?

Lately I had a discussion with a male friend about the events that resulted to the Greek #metoo in November 2020, when the Olympic Medallist and sailing champion Sofia Mpekatorou testified to the District Attorney over her accusation of the 1998 sexual assault against a powerful sports manager. My friend started the discussion with the usual doubts that most men have about these types of accusations. “Why now?”, “She’s probably lying. She might have been angry with him and wanted to hurt his career with these statements”. Then, when the #metoo domino escalated and more and more women and men started coming forward sharing publicly their stories of sexual abuse, well, he started believing her.

I explained my views, trying to remain calm and keep a relaxed tone, because I know that I’m not a great communicator when it comes to resolving issues that trigger so much anger and sadness in me.

I find it hard to have casual conversations about this. And it’s even harder with men that are not really educated on the subject and start every discussion about feminism with the #notallmen argument. 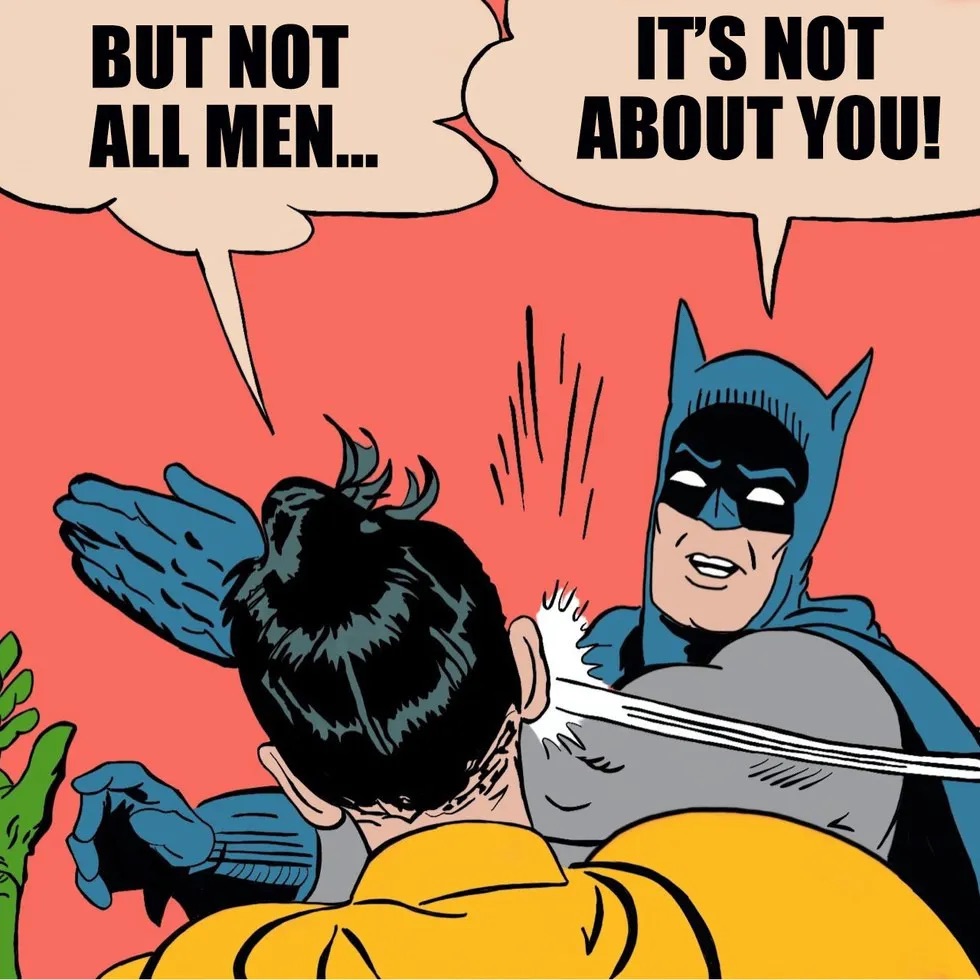 The meme above speaks my truth. But obviously violence won’t get us far, so I decided to write down a couple of things I’d like to say in these discussions.

Something like a to-do-list for the men that would like to be part of the solution and could use some practical guidance on how they can be better allies.

Depending on the amount of exposure you had in your life, you have a different understanding of the impact of patriarchy. How it affects everyone, but most importantly how it affects women. Start by educating yourself and learning more about it. Books, podcasts, movies, tedX talks, feminist pages and communities online. There are countless learning resources out there for you.

Many people, women among them, react negatively to the word feminism. Some think the movement is about women wanting to take the power from men(!), or my favourite, feminists are basically men haters that are not shaving their armpits and rarely visit the shower.

The patriarchal expectation that women should be hairless and always in an optimal appearance is another long discussion, but today I’d rather focus on other pain points. Google rape culture, femicide, glass ceiling and toxic masculinity.

All the barriers that women face are basically invisible for you, because you’re a man. If you don’t see the problem yourself, you probably think there isn’t one, right?

If you want to understand the women around you, listen to them. They don’t want your opinions, they don’t want you explaining patriarchy to them, they want you next to them to support them, willing to recognize and accept a couple of unpleasant truths.

Women learn to keep silent about all the things that make them feel ashamed about themselves. And if patriarchy does one thing well is to create a big amount of shame. Women internalize the narrative of patriarchy. They learn to own it. They carry a lot of responsibility for decisions that were’t theirs in the first place. It takes a lot of effort to deconstruct this system of limiting thoughts and emotions. It’s a painful, never ending process.

So, don’t expect women to be flawless, perfect feminists that would have to walk the walk since they talk the talk.

It’s not our job to teach you about feminism. Women don’t have the time and the emotional capacity to do that for you. In relevant discussions in social media I often find comments from men that “want to understand” and ask obvious questions. Usually these men elaborate on their misogynistic views in the comments to come.

The fact that you take an interest in feminism is great. But don’t ask your feminist friend or random women in the internet. All the knowledge is out there.

Make this knowledge actionable. Observe yourself, your actions, your thoughts and see how much of that sexist attitudes are present.

If you’re a parent, is it all blue for the boy and pink for the girl? Do you believe that your son is good at math and your daughter good at combining colours? Do you encourage both your children to play with a doll and a hammer?

In the workplace do you interrupt your female colleague to tell your opinion? Does it feel awkward that your supervisor is a woman? When the pregnant colleague complains about the lack of infrastructure in the workplace is your first thought that her hormones are driving her crazy and she should probably chill a bit?

With your pals, do you laugh with sexist jokes? When you see a woman wearing a short dress, is your first thought that she’s seeking male attention?

With your partner at home, are you the guy that “helps” with the household chores?

You don’t have to ace this test. The struggle against the stereotypes is common for men and women. We are all products of the same system. Be mindful. The more you observe and notice thoughts that are rooted in a sexist mindset, the better you get at it.

You have been enjoying your privileges for so long, that the thought of losing some of them makes you feel a bit uncomfortable. Also these privileges are the norm for you, so you might not even know what we’re talking about.

Well this is where this all gets down to. If you want to make a difference you have to acknowledge these facts and be willing to have less.

At the company where my partner works they exchange a lot of emails and each time a pronoun is used, it’s (obviously)a he/him. Last year on Women’s day they suggested to use she/her for a day. One male employee showed his discontent by saying “and what if we communicate like that from now on?”. I don’t know what you hear in this comment. But I ’ll tell you what I hear. “Using a language that addresses men and ignores everyone else is fine by me! It serves me, it makes me the center of the universe. I don’t want to change that” #MasculinitySoFragile

6. Use your privilege to help

When you observe sexist behaviours or other types of discrimination speak up. Create or be part of meaningful dialogues. Issues like abortion rights, femicides, sexual violence, work harassment. Be an advocate of women’s rights in public discussions.

Make a political difference one day at a time, taking small, but consistent action.

Are you in a meeting at work and someone manterrupts constantly a female colleague? Point it out. Are you walking late at night and you notice a woman walking in front of you? Keep some distance and let her walk without feeling intimidated by your presence. Does a woman point out sexist behaviour? Listen to her without getting defensive, believe her.

Your actions manifest your truth. If you believe in gender equality but remain silent, you support the system. And if that sounds judgemental, it’s because it is.

Did you ever wonder how this affects you directly? Well, when was the last time you had a good cry? When was the last time you talked openly about your emotions, showing your vulnerability and revealing a less appealing side of yourself? Patriarchy teaches you to be strong and only that. You’re not allowed to show emotions. You are encouraged to suppress your feelings since your childhood and any deviation from that is perceived as weakness.

Also patriarchy gave you the role of the breadwinner. Imagine all the self-demeaning thoughts and the consequences to your self value and mental health if your female partner earns more than you. Or if you have small children and you have the desire to spend more time with them taking parental leave, or working less to enjoy this unique time with them? Do you feel encouraged to do so?

It’s not unusual to observe a sexist attitude at the same person that will express homophobia.

Patriarchy excludes and oppresses everyone that doesn’t identify as a man. It demonizes femininity constantly connecting it with weakness and inability.

Patriarchy doesn’t give space to lesbian, gay, bisexual, non binary, transgender, genderfluid people. They’re not allowed to own space in this world. Feminism is fighting for a non binary gender equality. The one that acknowledges all the additional obstacles that come from intersectionality (race, class, disability, religion etc).

I am a feminist. A radical one, as I don’t see how you can be a little feminist. It took me many years of hiding behind the words, trying to say things polite, not to trigger any negative emotions by using the F word.

Now I know that being unpleasant is part of being a feminist.

I have made my peace long ago with the fact that there will be uncomfortable moments in discussions, and some relationships will probably come to an end. I invite you to participate in this discussion. Societies don’t improve overnight, systemic problems are not solved with one post in social media, but many small adjustments that lead the way to big changes do.

Teaching consent one boy at a time, updating legislation that is discriminating and exclusive one case at a time, inventing a new inclusive language one word at a time.

I’m pretty sure I won’t live to experience gender equality, but I’ll do my best to make sure that some generations ahead will do. I invite you to join me.

Every 8th of March, we celebrate the International Women’s Day and all the social media feeds and lifestyle platforms are full with feminist articles aiming [...]

Motivation is an inside job

I’ve been juggling a lot lately. Work stress, all types of chores and pending projects that need to get done, a lot of parenting [...]

Like a conversation I avoid to initiate, this post was on hold for quite some time now. It felt that the bigger the social issues [...]